As the war nears its third anniversary, survivors of the latest offensive arrive in a country already brimming with refugees. Syrian refugee Hind Al-Hussein and her three children were among the latest surge of new arrivals in Arsal.   © UNHCR/A.Purvis

ARSAL, Lebanon (UNHCR) - Tears welled in the eyes of Alia Abdelqader, 65, as she told of her husband's reluctant return to Syria that morning - just a few days after the couple had escaped to Lebanon. Their daughter, a gynecologist, has been trapped in the embattled city of Yabrud with her two children. She has not answered her cell phone in five days, so her father went back to find her. Alia is beside herself with worry. Of her own narrow escape last week, she said: "I pray that God never shows you what I have seen: shells were falling like rain." She wiped her eyes with a black veil. "It is a miracle that we survived."

Alia is among more than 10,000 Syrians who have fled over the mountains into Lebanon since a fresh offensive on the city of Yabroud and its outskirts began just over a week ago. The new arrivals represent a second wave of refugees to escape fighting in the same region of Syria, following an earlier influx in November 2013.

"What we are dealing with here is one of the largest single flows of refugees from Syria into Lebanon since the beginning of the crisis," said Rayan Koteiche, government liaison officer with UNHCR in the Bekaa Valley, said in an interview. Thousands of men and women queued nearby to receive vital supplies. As fighting continues, he added, more are expected.

Given the scale of the influx, providing assistance is proving a challenge. UNHCR and its partners, such the Danish Refugee Council and the International Committee of the Red Cross and local NGOs, are erecting shelters, handing out blankets and food and attending to basic necessities. The needs are enormous. "What we are doing now is trying to make sure that everyone has a place to stay and that everyone can keep warm at night," said Koteiche. The nights are cold, so shelter is the first priority.

The new refugees are arriving in a town that has already taken in huge numbers in recent months. The population of Arsal, normally 35,000, surpassed 83,000 this week - with far more Syrians now than Lebanese. Community centers, mosques and other "collective shelters" have long since run out of space. Across the town, a patchwork of blue and white tents and impromptu shelters is filling up any open space. Some new arrivals are living in vans and the backs of trucks. With this new influx, the number of informal tented settlements in the town has climbed from six to more than 30.

The latest exodus from Syria began in earnest when bombing intensified on the night of 12 February. Hind Al-Hussein is the mother of three children, aged 9 months to two years. Not yet 20 herself, she fled with her children when the bombing started in Yabrud. "We were given 24 hour's notice to evacuate the area," she said. "I took the kids and we managed to squeeze with others into a van. The area was being shelled heavily, you just don't know where it's coming from… Our house was hit twice. My husband told me to take the children and leave. He couldn't come with us." Now she is waiting for him to join them in Arsal.

To avoid shelling, many of those fleeing Yabrud are finding alternative routes over the mountains along rugged mountain tracks still blanketed with snow. Trucks and Chinese-built motorbikes, a common form of transport, stacked high with mattresses and other belongings, are arriving in Arsal caked with mud.

For many of the refugees, the escape to Lebanon follows several years of displacement and deprivation within Syria. Hind Al-Hussein, for example, had already been uprooted within her own country. Originally from Homs, she fled to Yabrud seven months ago. Her husband, a mechanic, couldn't find work and the family subsisted on dried bread and handouts from neighbors. Two of her three children, she told an interviewer, were already weak and sick before making the eight-hour nighttime journey to Lebanon.

Alia Abdelqadir managed to hang on in her home village on the outskirts of Yabrud until the latest fighting began. Earlier this month, shells that once screamed over the village began falling inside, and she was forced to flee the country where she had spent her entire life. Five children managed to accompany Alia and her husband when they escaped in a crowded van to Arsal last week. Now she spends each day waiting, and praying, for her husband, her daughter and her grandchildren to join her in exile.

By Andrew Purvis in Arsal, Lebanon 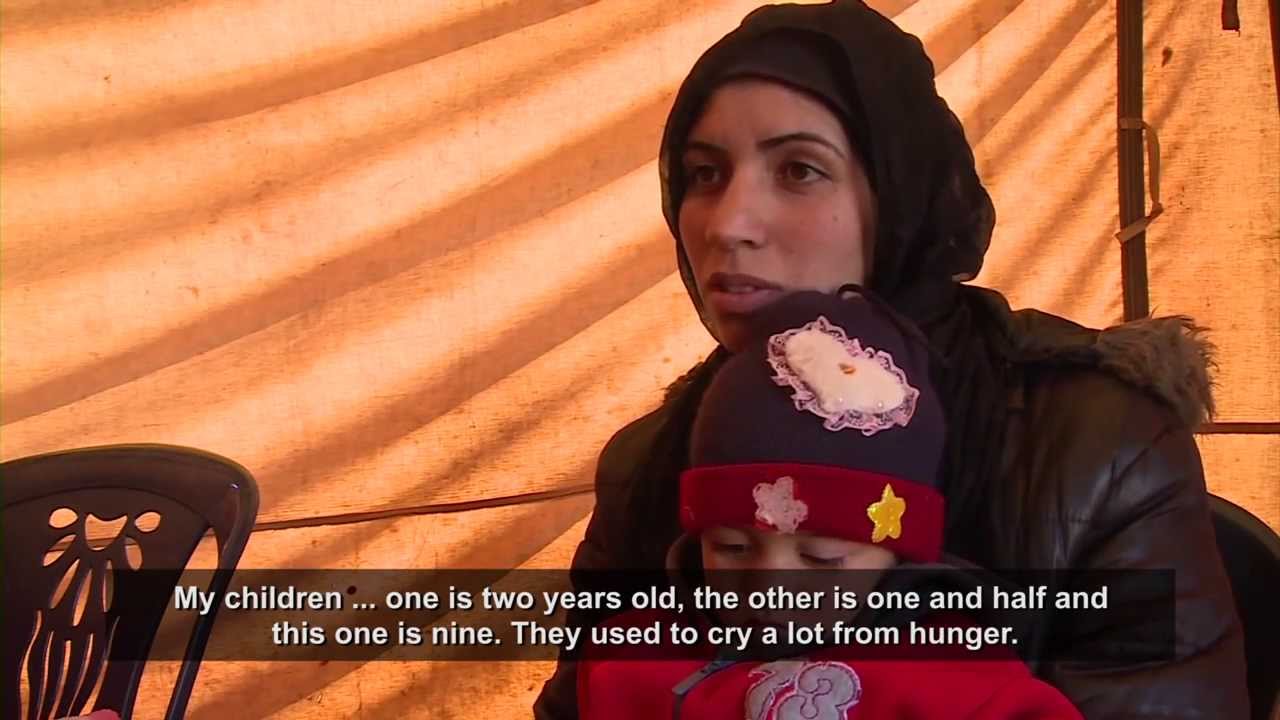