Fierce fighting has left much of Aleppo in ruins, but with help, those now returning are determined to repair its wounds. People walk along a deserted road in east Aleppo, where some of the worst fighting of the Syrian conflict has taken place.   © UNHCR/Bassam Diab

ALEPPO, Syria – The streets surrounding Aleppo’s medieval citadel still bear the scars of the years-long battle that reduced swathes of this ancient city to rubble. Yet amid the destruction, from a side street comes the sizzle of spitting fat and the aroma of grilling lamb – a sign that normal life is striving to return.

Abu Ahmad’s family has been selling skewers of barbecued meat to visitors and tourists from their shop in the shadow of the citadel for more than half a century. The family is synonymous with their trade, their name “Al-Shawa” meaning “grill master” in Arabic. He was displaced for four years during the worst of the fighting.

“Business is still very slow, but a sense of pride for my family’s business meant that I wanted to reopen as soon as it was safe,” Abu Ahmad explained. With electricity supplies still unreliable or non-existent across much of the city, for now he grills his wares outdoors on a metal barbecue in front of his derelict shop.

Aleppo was Syria’s most populous city before the conflict.

With a pre-conflict population of more than four million, Aleppo was Syria’s most populous city and economic hub before the conflict. Years of fierce fighting have laid waste to much of the city, destroying vital infrastructure, flattening schools and hospitals and displacing hundreds of thousands from their homes.

Since the start of 2017, an estimated 440,000 displaced Aleppans have returned to the city and surrounding areas. Some 300,000 are thought to have returned to Eastern Aleppo, which witnessed some of the heaviest fighting of the entire Syrian conflict.

Many of those now returning have spent years on the move, and are going back to damaged homes in neighbourhoods without power or running water because they have no other option. The overall picture across the country remains grim. More than six million Syrians are still displaced, including more than a million forced to flee their homes in the past year alone. 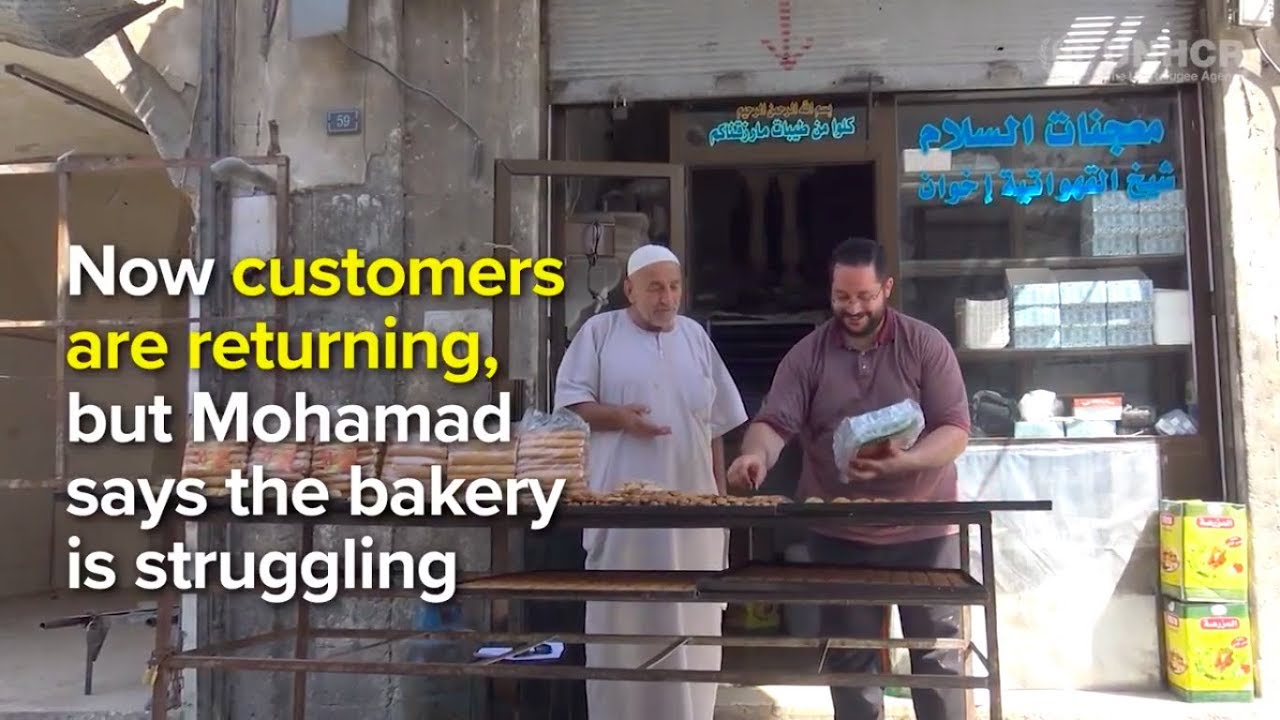 For those that have chosen to return to Aleppo since the fighting stopped, UNHCR, the UN Refugee Agency, and its partners are providing assistance to help people get back on their feet. Aid includes building materials to help rehabilitate homes, mobile medical services, distribution of mattresses and blankets and legal assistance with birth registrations and civil documentation.

In some of the most devastated neighbourhoods of Eastern Aleppo, residents reported infestations of rodents amongst the rubble, posing a public health risk. “Our children were afraid to go outside because of all the rats and mice,” one resident said.

UNHCR cooperates with local Namaa to provide residents with protective equipment, environmentally friendly pesticides and training to tackle the problem.

Another critical challenge across Syria is the high number of children missing out on education. It is estimated that as many as 1.75 million children of school age are currently out of school, with a further 1.35 million at risk of dropping out.

Abdullah is 17 years old from Al-Hader town in southern rural Aleppo, and was unable to attend classes for two years when heavy fighting forced schools in the area to close. “I just want to finish my education so I have a chance of getting a good job and living with dignity,” he said. Abu Ahmad Al Shawa, in his 50s, has returned to Aleppo and reopened his restaurant in a totally destroyed building.  © UNHCR/Vivian Tou'meh

A friend told him about one of 15 community centres funded by UNHCR in Eastern Aleppo that offers accelerated remedial classes in mathematics, physics and biology to help teenagers prepare for their public high school exams.

Three mornings a week, Abdullah takes a two-hour journey by minibus into the city to attend the classes, and hopes that by the end of the year he can pass his exams. “After missing two years, I found the mathematics very difficult especially. I needed someone to explain it to me as my parents cannot teach me these subjects.”

While the fighting in Aleppo may have ended, those returning know that it will take many years before normality is restored.

Standing outside his empty shop threading cubes of lamb onto a wooden skewer, Abu Ahmad waves a hand at the flattened houses surrounding the ancient citadel and sighs. “Destruction is easy but rebuilding is hard. It will take a long time to bring Aleppo back from all this.”