Shooting on homemade sets and equipment, refugees at a camp in Jordan are making a soap opera offering a humorous take on serious issues.

Amid the familiar bustle of daily life in Jordan’s Za’atari refugee camp, something out of the ordinary is taking place in a dusty yard outside one of the many thousands of shelters. A dozen or so refugees are busy erecting sets, setting up lights and cameras, and donning makeup and costumes.

Ahmed Hareb and his friends are about to start filming on their soap opera, entitled Ziko & Shreko. It offers a humourous take on serious issues affecting Syrian refugees, including child labour and early marriage. They often film at night due to the lack of electricity in the camp during the day, when they hold rehearsals instead.

“Initially, when the neighbours heard the sounds they would come and look and be surprised by what we were doing, but now it’s become normal,” explains Ahmed, a 34-year-old refugee from Dara’a in southern Syria.

The idea for the soap opera came after Ahmed and a group of 25 other thespian refugees had put on a series of successful plays at the camp. They wanted a way for more people to see their work without being restricted to a stage.

“When I got on the stage I forgot all about the audience and my fear."

They plan to devote around half a dozen five-minute episodes to each issue, before tackling the next subject and introducing new characters. The group has lots of ideas for new material. “We could make an endless series, like ‘Friends’,” says Ahmed.

Ahmed starting acting at the age of 15, at a specialist school for disabled youngsters back in Syria. A hereditary muscular disorder requires him to use crutches and a specially adapted scooter that he built himself to navigate the camp’s rough terrain.

The stage cast an instant spell on the youngster, and he would spend his monthly allowance intended for food on going to see plays at the local theatre. He became assistant director of the school’s theatre company as well as taking lead roles in their productions.

“When I got on the stage I forgot all about the audience and my fear,” he said. “Some people have a gift with a pen, writing poems or novels, but for me it’s acting.” 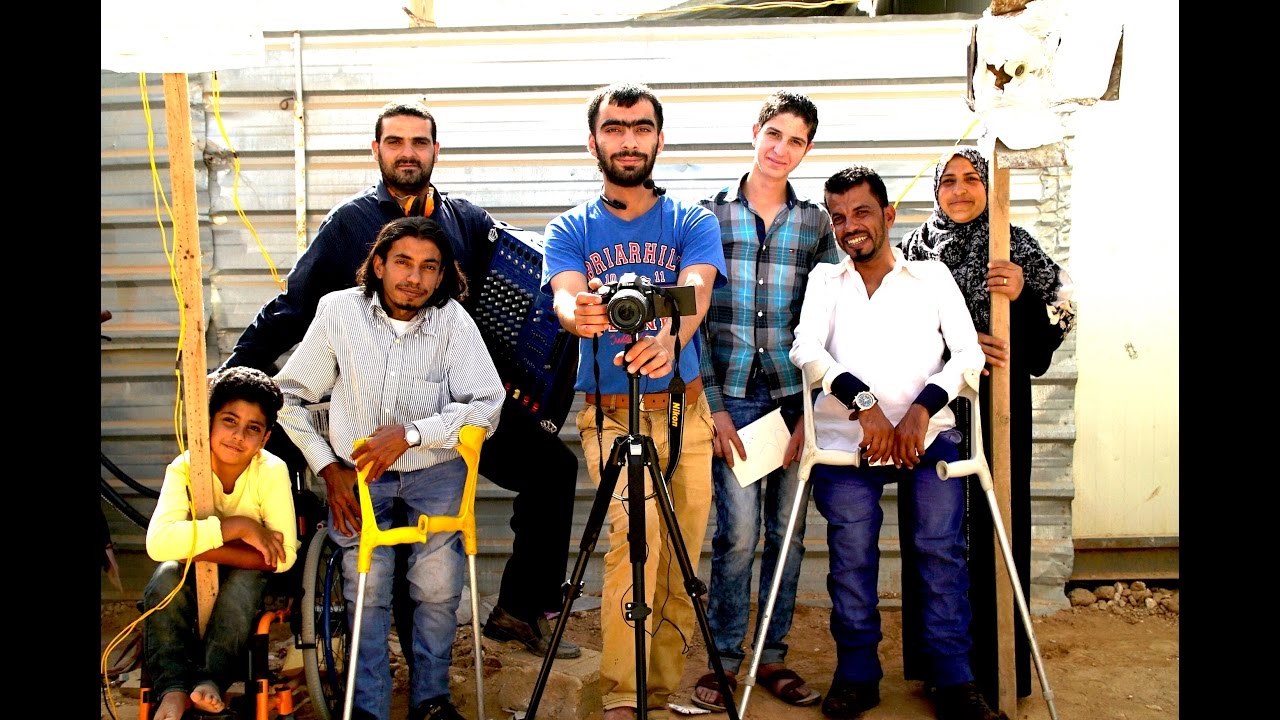 "When I got on the stage I forgot all about the audience and my fear."

After graduating with a diploma in computer engineering and then meeting his wife Nisreen, Ahmed took a break from the theatre while he worked to support their young family. But even then, Nisreen remembers him dressing up in his father’s old clothes and acting out sketches around the table after dinner.

The couple and their eldest son Hamza, now aged eight, were living in Damascus when the conflict started. As the fighting drew closer, Hamza became so scared that the family decided to head to Jordan, arriving in Za’atari in 2013.

“When we first came here we were shocked. We used to live in a house and move freely, and now here we were living in a tent,” Ahmed says. “In the first year I couldn’t act. We had to rebuild our lives from scratch, so I put the idea out of my head.”

But a year later, after setting up his own shop in Za’atari’s market selling mobile phone credit and soft drinks, Ahmed and his family were more comfortable and his thoughts returned to acting.

After establishing the theatre group with his brother and friends, he recently got a job as a theatre trainer in the camp with the NGO International Relief & Development. He teaches acting classes to a group of 20 refugees aged 12 to 50. As well as taking pride in seeing them gain confidence and a new skill, he has also recruited some of them for the soap opera.

Filming the episodes in the backyard of a refugee shelter has its challenges. With only the most basic camera and sound equipment to work with, the group has had to construct many of the materials from scratch, including hand-painted backdrops, a homemade camera dolly, and stage lights made from discarded olive oil cans and aluminium foil.

Despite their basic equipment, however, the group is not without expertise. As well as some who have been acting for years, both the sound engineer and cameraman had professional experience back in Syria before the conflict.

When filming is complete, Ahmed hopes to share the short episodes online as well as organizing large-scale screenings on a projector inside the camp. He hopes the project will provide entertainment for people living in the camp, but also convey a wider message about Syrian refugees.

“The first aim is to reverse the image of a refugee as simply a refugee – he is a human being like any other,” Ahmed says.

“We consider acting a way to stand up to life. We haven’t given up, we are working, and we want to live normally. Through acting we can also help others maybe, with a smile, and alleviate a small part of their suffering.”