Brothers reunite with mother after ordeal in Central African Republic

Moussa and Ibrahim were recently reunited with their mother and siblings in a Cameroon refugee camp after months in the bush, eating little and sleeping rough. Ramatou holds Moussa's hand as she takes him to the reception centre in Mbile Refugee Camp, where he and his brother will be registered by UNHCR and its partners. They will then receive a hot meal.   © UNHCR/F.Noy

MBILE REFUGEE CAMP, Cameroon, May 26 (UNHCR) - Four months ago, Ramatou faced every parent's worst nightmare - the possibility of losing a child. Last week, she had a joyful reunion with two of her missing sons, aged 10 and 11, at a refugee camp in eastern Cameroon, but it was a bitter-sweet moment because her husband and eldest boy were still missing.

Many of the other Central African Republic refugees in Mbile camp understand what Ramatou is going through. They too have had to flee villages in a hurry to escape surprise attacks, and many families get separated in the confusion. UNHCR and its partners try to reunite families, but some will never show up.

Ramatou's ordeal began on a nondescript mid-January day, when the spreading violence that has plagued the Central African Republic for months reached her village in the south-west, where she lived with her husband and 11 children. The family ran a small trading business.

The 45-year-old said the attackers were Christian militiamen, who broke into people's homes. She ran in one direction with eight of the children while her husband sprinted away with three of their boys for the cover of the bush.

Five days later, Ramatou and her group were found by African Union peace-keepers and eventually made their way across the border, where they have joined more than 80,000 refugees who have fled to Cameroon this year from Central African Republic.

"My oldest son is still in the bush; I don't know where he is," she said, adding: "He is 25 years old. Until now he has not come out. My husband also is somewhere in the bush in CAR [Central African Republic]."

Ramatou still hopes that her husband and son will rejoin them in Cameroon. She knows that while some refugees like herself arrive in convoys organized by the International Support Mission to the Central African Republic, many more hide in the bush for months, eating roots and trying to avoid fighters before crossing the border with Cameroon. These people arrive completely exhausted. Many lose family members on the way, either from hunger, disease or attack.

Moussa, 10, and Ibrahim, 11, did it the hard way before being reunited with Ramatou and their siblings at Mbile camp. They spent four months walking in extreme conditions in the bush. They had hardly anything to eat and they slept rough. On top of all that, they had to run the gauntlet of further militia attacks.

"I saw people being killed in front of us during the attacks," Ibrahim said, adding that during one attack, they became separated from their father and elder brother and had to press on alone. In Gbiti, just across the border from Central African Republic, they were taken in by a host family.

Then, as their only sister, Mairama, explained, they had a bit of luck. She heard that they might be in Gbiti, which is four hours away by bus, and asked UNHCR to help. The refugee agency, which assists unaccompanied minors every day at the border crossing, found the boys and arranged for them to be transported to Mbile.

"I did not know that they were coming. When I saw them, I had a lot of emotion," said Ramatou, who greeted her sons gently, her heart less heavy. "In Gbiti, they did not know anyone," she said, the concern clear in her voice.

''For the past four months I have been feeling unwell, but now I am feeling better, but not totally recovered because my oldest son and my husband are still in the bush," she concluded, while thanking UNHCR for helping to bring back the two missing boys. While her family was partly reunited, many more remain separated by the conflict. They must live in hope of reunion as they contemplate an uncertain future. 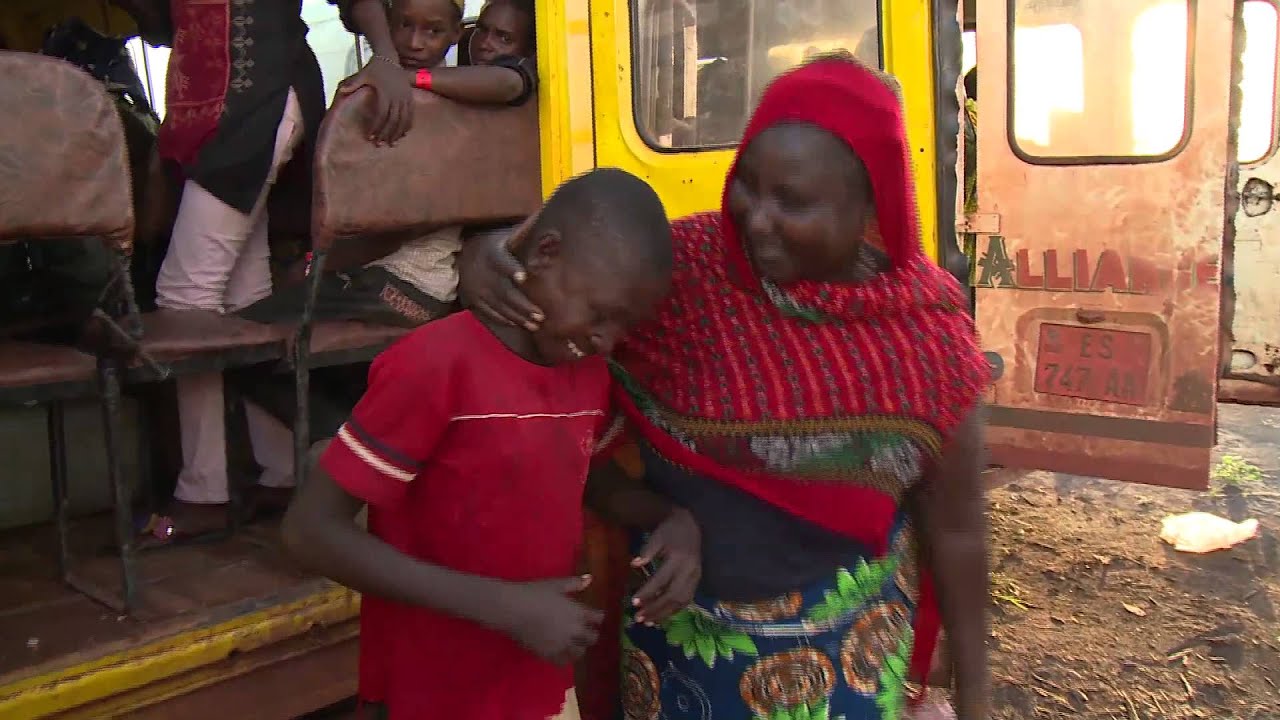