After losing their father and their home, one Syrian family are making new friends and reviving old passions in Portugal.

Fatima and her family were resettled in Portugal over a year ago.
© UNHCR/Bruno Galán Ruiz

In a suburb on the outskirts of Lisbon, Portugal Fatima and her two daughters Rana and Reem are preparing for a dinner party. Tonight, they will invite Portuguese friends into their home to taste home-cooked Syrian cuisine.

They have five hours left to finish the myriad dishes on offer and the kitchen is a hive of activity. Twenty-eight-year-old Rana wraps small bundles of rice with cabbage leaves to make waraq anab (vine leaves), whilst 27-year-old Reem is shaping small hollow meat cases ready for kibbe. Fatima, the matriarch of the family, is chopping large handfuls of parsley and mint to get the right texture for another Syrian delicacy, the tangy salad tabboule.

"You can’t imagine the scenes."

As they cook, Fatima’s 21-year old son Rafat comes in to check on progress. Although he is not cooking today, Rafat is also a chef in his own right. Back in Damascus, before the war, he used to work at the family restaurant, Zayn.

“It was a kebab and chicken restaurant and I was the one who wrapped the sandwiches, cut the pickles, cucumbers and tomatoes,” he explains. “I had to be fast, as it was me who gave the customers their sandwiches.”

Those days seem like another lifetime to the family and reminiscing still hurts. In 2012, just a year into the conflict, they were forced to flee their home after clashes between Syrian and opposition forces. They took refuge in Yarmouk camp, waiting until it would be safe to return. But when Rafat’s father visited the family home, to check that it had not been destroyed, their world fell apart. His body was later found in a nearby building, along with 149 others.

“The bodies were left all over the neighbourhood,” Rafat explains. “They even found people in toilets of the mosque. You can’t imagine the scenes. To this day, I still don’t understand why they killed him.” 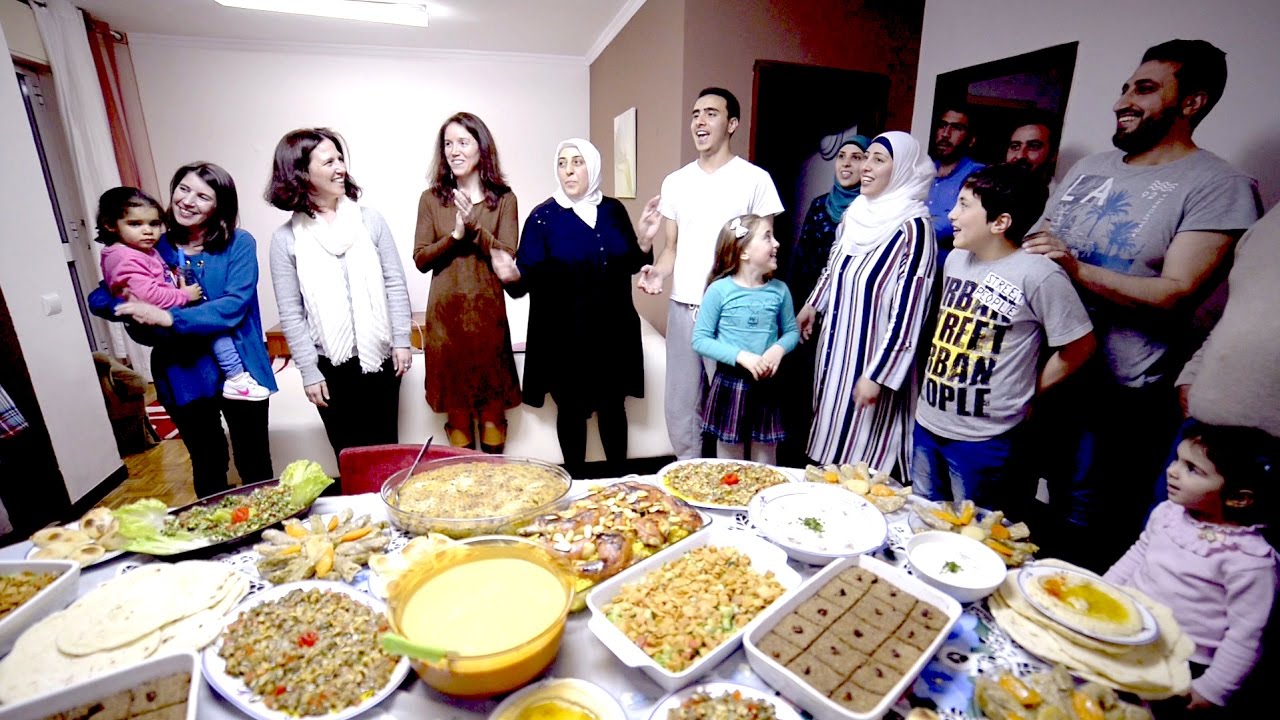 Fatima and her family are making new friends and reviving old passions in Portugal.

Devastated by his death, Fatima and her four children decided to leave Syria.  After two weeks sleeping on the streets, they eventually  fled to Egypt, where they spent nine months surviving off food vouchers and donations from local charities.

Fatima and her daughters did odd jobs sewing to supplement what little money they had. But, in 2013, political tensions resulted in a hardening of attitudes towards Syrians, some of whom suddenly found themselves targets.

UNHCR, the UN Refugee Agency, found Fatima and her family were eligible for resettlement.

“We knew so many people who were going illegally by sea to Germany, putting their lives in danger,” she says. “So many people were dying. I said to my children, this is our chance to go to Europe legally and start over.” The Dabah family, who fled war in Syria in 2012, eat breakfast at their home in Lisbon, Portugal.   © UNHCR/Bruno Galán Ruiz

As soon as they arrived in Portugal, the family’s integration began, with the help of the Jesuit Refuge Service (JRS), an international Catholic organisation. Fatima was impressed by the support they received.

“When we came to the airport, people were there to welcome us. They took us to us to our new home, they went to work immediately on our papers and residency straight away. They put our kids immediately in the school. Those eleven months were great, the only thing was that the time wasn’t enough for us to adapt and be financially independent.”

After 11 months, when financial support ended, Fatima worried about how she would support her family. Her son-in-law had a job as a tailor working for a local designer, and the family still received some help. But with seven mouths to feed, including Fatima’s two grandchildren, the pressure was mounting.

Then, Fatima got a call asking if she and her daughters would take part in new scheme, Pâo a Pâo (Bread, Bread), a refugee integration project set to launch in December 2016 at the Santa Clara market in Lisbon. The idea was that Syrian refugees would showcase their food at private dinners during the festive season.

“When we came to the airport, people were there to welcome us."

Francisca Henriques, one of the four founders of Pão Pão, was amazed by the response. “We were totally surprised because it was a huge success,” she says. “Initially, we opened for groups of more than 20 people, but we never had less than 100, it was crazy. One day we had 130 people. It was not only because people were curious about Middle East food – it was because people wanted to help and they didn’t know how.”

Encouraged by this success, the founders decided to open a permanent restaurant at the market. They launched a crowd funding campaign to raise funds for the renovation and, within one month, they hit their target of EUR 15,000. Mezze will open in May 2017 and employ 15 refugees. In between meals, the space will offer workshops, cultural exchanges and music.

For Fatima and her children, Mezze will allow them to carry on the family tradition started by their father in Damascus. It will give this proud family the chance to be financially independent in a country they now consider home. Their delicious home cooked dishes will also give locals a taste of Syria.

“We found that the Portuguese really like our cooking, because it is full of flavours and spices,” says Fatima, as she puts the finishing touches to her tabbouleh salad, ready for the guests’ arrival. “It is the way we communicate now. We carry on cooking and they are learning.”