Azizbek Ashurov, a lawyer, whose work has supported the efforts of the Kyrgyz Republic in becoming the first country in the world to end statelessness, is the 2019 UN Refugee Agency’s Nansen Refugee Award winner.

Azizbek Ashurov, a lawyer, was honoured as the 2019 Nansen Refugee Award Laureate for his outstanding 16-year commitment to ending statelessness in Kyrgyzstan, ensuring that those left stateless by the break-up of the former Soviet Union finally have citizenship. At a prestigious event in Geneva’s Bâtiment des Forces Motrices, performances by Venezuelan singer Danny Ocean and Swiss musician Flèche Love set the scene for a celebration of Azizbek Ashurov’s ground-breaking work.

This film captures the highlights of the ceremony, including artists and performers, key note speakers and speeches from the UNHCR High Commissioner and the winner. 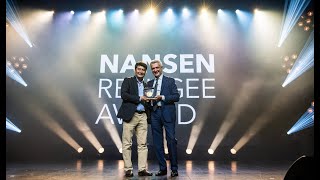 An activist who brings together communities torn apart by conflict in the Democratic Republic of the Congo; a champion of LGBTI rights in El Salvador; a physiotherapist who gets injured Afghans back on their feet; a volunteer who helps Syrians start over in Jordan and an organization negotiating safe routes to Italy for refugees.

These are the every-day heroes going to extraordinary lengths to help forcibly displaced people in great need, who have been chosen as the regional winners of the UNHCR 2019 Nansen Refugee Award.

Nansen Refugee Award laureate reflects on impact of her work