After 10 years of crisis, life is harder than ever for displaced Syrians. Millions of Syrians have been forced to flee their homes since 2011, seeking safety as refugees in Lebanon, Turkey, Jordan and beyond, or displaced inside Syria. As the crisis continues, hope is fading. With the devastating impact of the pandemic and increasing poverty, every day is an emergency for Syrians forced to flee.

UNHCR works hard to help, leading a coordinated effort across the region. Together with our partners, aid organizations and host governments, we offer a lifeline to those in need.

people in need of humanitarian and protection assistance in Syria

Syrian refugees worldwide, of whom 5.6 million hosted in countries near Syria Millions of Syrians have escaped across borders, in what has become the world’s largest refugee crisis in decades.

Many lost employment since the COVID-19 pandemic has broken out. In Lebanon, nine out of ten refugees now live in extreme poverty. There are no formal refugee camps and, as a result, Syrians are scattered throughout urban and rural communities and locations, often sharing small basic lodgings with other refugee families in overcrowded conditions.

In Jordan, over 660,000 men, women and children are currently trapped in exile. Approximately 80 per cent of them live outside camps, while 128,000 have found sanctuary in refugee camps such as  Za’atari and Azraq.

Many have arrived with limited means to cover even basic needs, and those who could at first rely on savings or support from host families are now increasingly in need of help. In Jordan, about four out of five Syrian refugees (close to 80 percent ) were living under the national poverty line even before the pandemic, surviving on about US$3 a day

Iraq also is a main host country for Syrians, with some 244,000 registered refugees, while in Egypt UNHCR provides protection and assistance to more than 130,000.

But although life in exile can be difficult, for Syrians still at home it is also extremely challenging.

We provide life-saving humanitarian aid for Syrian refugees, helping the most vulnerable with cash for medicine and other basic necessities, stoves and fuel for heating, insulation for tents, thermal blankets and winter clothing. We also help refugees with access to clean water and sanitation. For those who have been displaced but remain in Syria, we provide shelter kits and non-food items as well as protection services and psychosocial support.

During the COVID-19 pandemic, UNHCR has supported hospitals and other health structures in areas where refugees live. It also provided emergency cash grants to those who were hit hard by rising poverty during the pandemic, and were often not able to pay for rent and clothing or put food on the table.

To ensure a coordinated response in the main refugee-hosting countries, UNHCR co-leads the Regional Refugee and Resilience Plan (3RP) for 2021.

In 2021, the 270 partners under the plan aim at supporting more than 10 million people – including over 5.5 million Syrian refugees and 4.8 million members of their host communities. This is the highest number since the Syria crisis began.

The required funds for 2021 will be used to address the most pressing needs, among them for example covering school fees for children and youth, food and cash assistance, access to primary health care and hospital treatment for hundreds of thousands, livelihoods support. In addition, they will help to address the most common protection risks, such as gender-based violence. Much of the funds will also be used to strengthen national and local systems and their ability to deliver services to host communities and refugees who live side-by-side.

The 3RP complements the Humanitarian Response Plan, which is covering humanitarian action inside Syria.

"After ten years, half of the Syrian population has been forced to flee their homes. (…) The gravity of this crisis must not weaken our solidarity for Syrians. On the contrary, we must redouble our collective effort to support both refugees and the communities hosting them. " 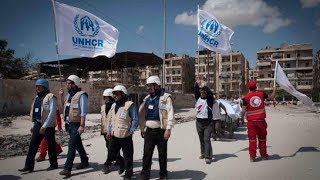