Over 15,500 asylum-seekers pre-registered on mainland Greece Ghulam Ali Jaffari, his wife Nabila, and their two-year-old son Amir talk with UNHCR staff while waiting to collect their newly issued ID's by the Greek Asylum Service.  © UNHCR/Achilleas Zavallis

ATHENS, Greece – More than 15,500 asylum-seekers currently living on mainland Greece have now received temporary cards, valid for one year, allowing them to reside legally in Greece pending a final decision on their asylum applications.

A large-scale exercise to pre-register asylum seekers on mainland Greece was launched on June 8 by the Greek Asylum Service with UNHCR’s support. Pre-registration also gives them the right to access services, pending the full lodging of their asylum application.

"The exercise will help to identify those eligible for family reunification or relocation."

“It will also identify persons with specific needs so that they may be referred to the appropriate organizations and receive assistance and support,” he added.

The pre-registration exercise aims to address the need to access international protection by an estimated 49,000 people currently on mainland Greece. The process is open to those who entered Greece between January 1, 2015, and March 20, 2016.

For most of the refugees and migrants residing on the Greek mainland, pre-registration is the first contact they have had with the government since they arrived in the country.

For Afghans in particular, most of their initial entry documents, known as "police notes," have since expired. This means their presence in Greece is technically illegal and that they could even face arrest – though this has rarely happened.

"We have more freedom now, because we have a legal status."

Ghulam Ali Jaffari and his wife, Nabila, said they felt relieved after completing pre-registration recently at Elliniko, a former airport-turned-refugee shelter in Athens. The couple, who arrived in Greece in late February with their two-year-old son, Amir Reza, and Ghulam Ali's 15-year-old brother, took a boat across the Aegean Sea after traveling from Kandahar province, Afghanistan.

Their documents expired at the end of March, and they have not wanted to leave Elliniko as a result of their uncertain legal status, now ended.

"We have more freedom now, because we have a legal status," Ghulam Ali said. After pre-registration they were given an official asylum-seekers' card which also gives them access to Greek public health and educational services.

The pre-registration exercise is supported financially by the European Commission (DG Home) and implemented with the help of UNHCR and the European Asylum Support Office (EASO). 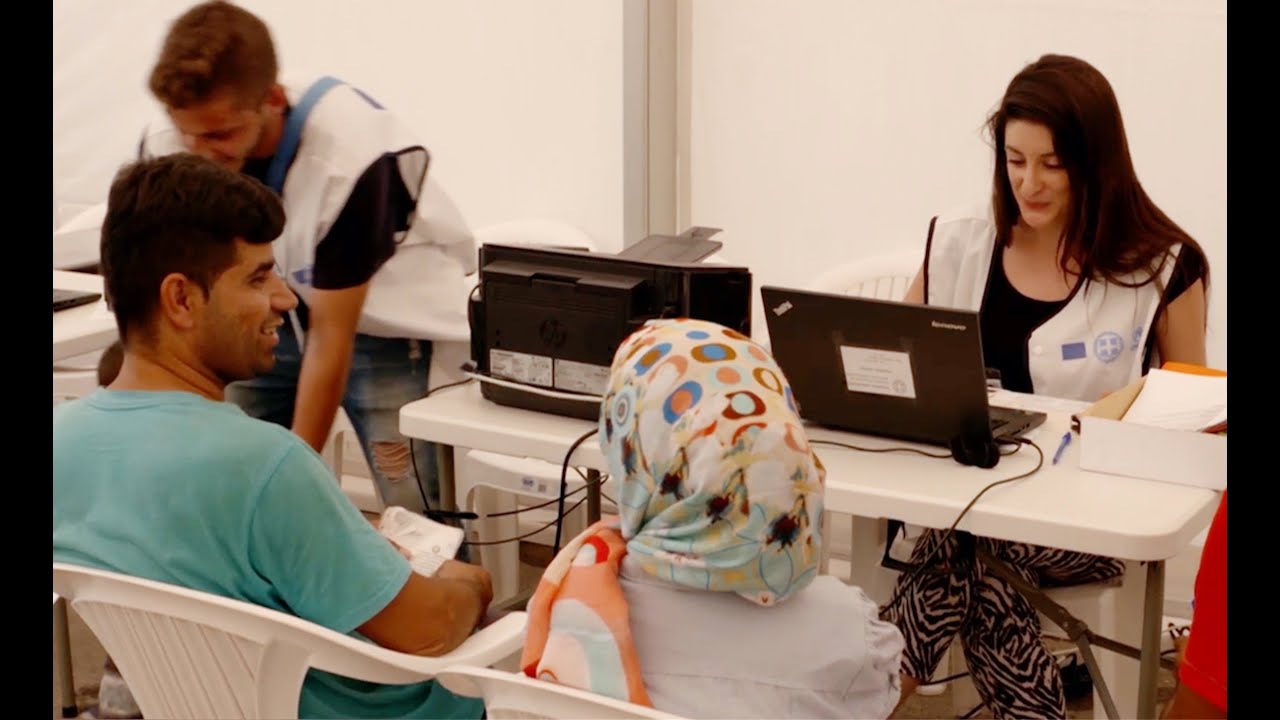 In addition, the International Organization for Migration (IOM) provides information about their Assisted Voluntary Return programme.

“UNHCR has supported the exercise with technical guidance on the design, planning and preparation, as well as the provision of material resources. UNHCR is also supporting the identification of people with specific needs and facilitates their access to assistance,” Spindler detailed.

At the end of the exercise, those pre-registered will be given an appointment with the Asylum Service to lodge their asylum claim and formally access family reunification and relocation. Asylum-seekers will be notified of the date of their appointment by a text message (SMS). People with specific needs, including unaccompanied and separated children are being prioritized for appointments.

Following the pre-registration, expanded capacity will be needed to fully register, process asylum claims and follow up family reunification and relocation cases. UNHCR is ready to support the Greek authorities in this regard.

Faster implementation and an increased number of places for relocation are needed as more people eligible for relocation are identified. As of June 29, only 1,970 asylum seekers had been relocated from Greece out of an agreed target of 66,400.

Resettlement for those who have family links outside the EU should be also explored.

The exercise is proceeding as planned, with processing capacity now increased to about 700 people per day. The pre-registration is expected to be completed by early-mid August. Pre-registration is ongoing in the Attica and Thessaloniki regions and will move to other parts of Greece in the following weeks.