It was originally seen as a temporary stop. Today, Za'atari is home to 120,000 people, mostly women and children, making it the world's second largest refugee camp. ZA'ATARI, REFUGEE CAMP, Jordan, July 29 (UNHCR) - Exactly one year ago, a 53-year-old Syrian refugee called Issak* emerged from the darkness and crossed Syria's border with Jordan. He was followed by about 450 refugees that night, and these exhausted, scared people became the first inhabitants of the brand new Za'atari Refugee Camp, located about a dozen kilometres further inside Jordan.

A year later, Za'atari is home to 120,000 people, mostly women and children, making it the world's second largest refugee camp after Dadaab in Kenya. It was originally seen as a temporary stop. "I thought that after a month I'd come back to Syria," Issak recalled.

Back then, a smattering of tents dotted the landscape. There were no paved roads or electricity. Today, it sprawls across the landscape, teeming with humanity as one of the largest urban centres in Jordan. And there seems to be no end in sight to its growth.

It's like a huge caravan park, with more than 17,000 of the vehicles providing shelter for the Syrians - the most recent funded by Kuwait. Hundreds of thousands of loaves of flat bread are given out each morning and several million litres of water are trucked in daily to this arid area. Thousands of latrines and showers have been constructed.

More than 270 Jordanian teachers work in the camp's primary and secondary schools, accompanied by 90 Syrian assistants. Thirty-three child-friendly spaces have been developed. Some 1,000 businesses line Za'atari's streets. Ten children are born in the camp each day. Tens of thousands of children in the camp have been vaccinated against measles.

Setting up and expanding the camp has been a major challenge. It's the equivalent of building a city the size of Cambridge in England or Fargo in the United States in a single year. Moreover, the camp is under-funded and under-staffed. Security issues remain a challenge. "It's been a year of mixed emotions," said Andrew Harper, UNHCR's representative in Jordan. "We've accomplished so much, but the needs are simply tremendous."

Nevertheless, most of the Syrian refugees in Za'atari work with UNHCR and its partners to make the best of their situation. With the conflict in Syria showing no signs of easing, refugees have started their own businesses. Some have even built small fountains as reminders of the homes they have left behind. Refugee leaders and community members take part in everything from health committees to garbage collection and the distribution of electricity networks.

One refugee, Gassem, keeps busy by tending to an embryonic garden that he began just a few weeks ago. Beans, corn and tomato plants are beginning to sprout. A chicken wanders around the space near his caravan. "I want to see green again," said the 24-year-old, who worked as a vegetable seller in the nearby Syrian city of Dara'a before he fled six months ago. "Green reminds me of home."

With the thunder of artillery and mortar fire still raging across the border, he knows that Za'atari may have to be home for a while. "The war is getting worse and worse," he said. "We are grateful to be here."

The Syrians who left all behind, try to live as normal a life as possible here. On Za'atari's main thoroughfare, dubbed the Champs-¬Élysées, 28-year-old Mohammed has started his own hardware store. Profits are meagre, but he still gives some money to widows and those living with disability.

He sees his establishment as part of an effort to meet the needs of his community. "Eight months ago things were not good, but now we're going in a better direction," he says. "People are starting to find work in the camp and we're working with community organizations."

Za'atari was opened in part to ease some of the burden on Jordanian host families who opened their homes to thousands of desperate and destitute Syrian refugees. Holding centres for refugees were choc-a-bloc with mostly women and children seeking safety from the violence across the border.

The luxury of safety is not lost on new arrivals like 34-year-old Fatima,* who registered as a refugee less than 24 hours ago. Fatima and her seven children fled from home after their village of Babel Amar was shelled. They went from village to village, at each stop encountering nothing but the fire of warfare.

They moved to the desert areas of Syria - where they were reliant on the mercy of local residents for food and water - before crossing the border and coming to Za'atari camp. "We're just living under God's mercy," she said. 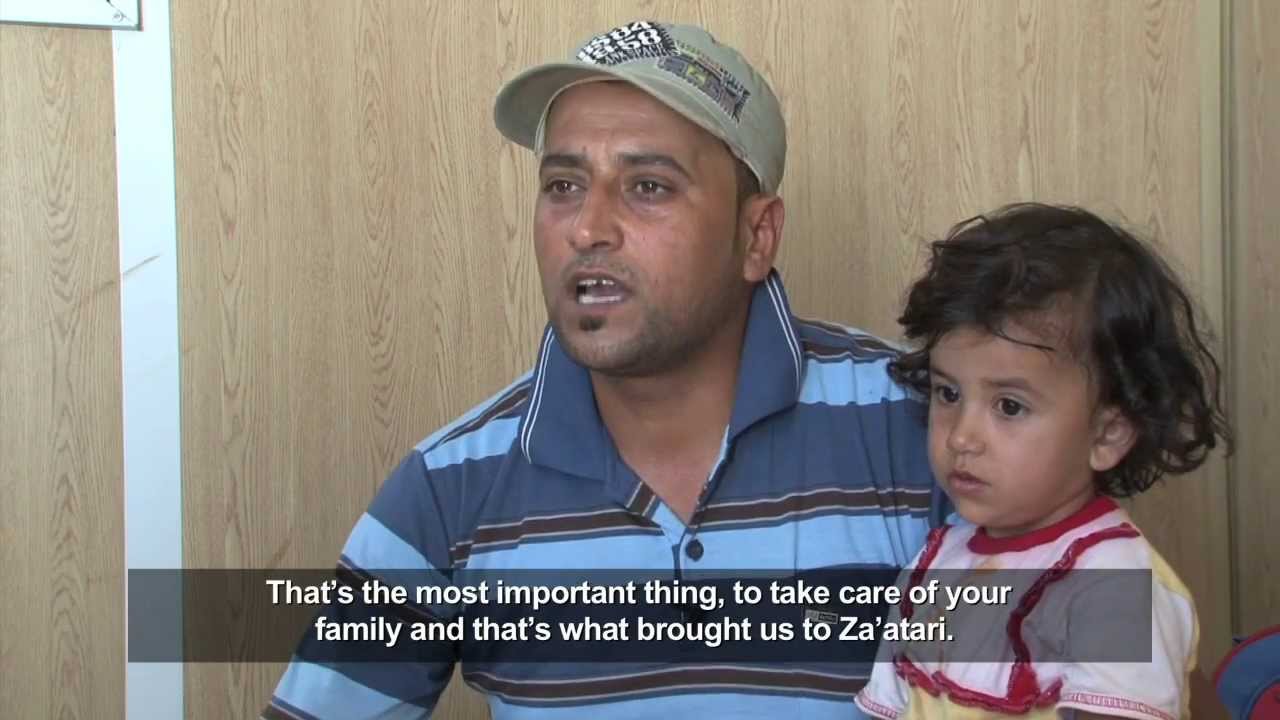