Families struggle in heat and dust of Iraqi desert camp Thari Ismael and his family are living in a communal kitchen in a camp for displaced families in Habbaniyah, Anbar Governorate, Iraq.  © UNHCR/Caroline Gluck

HABBANIYAH, Al-Anbar Governorate, Iraq – The temperature hovers above 50 degrees Celsius in Habbaniyah camp, a dusty place of refuge in the Iraqi desert, and there is no shade for thousands of families taking shelter here.

I met 53-year-old Thari Ismael and his family in a flimsy, plastic-sided building originally intended as a communal kitchen. “There were no tents available, so we moved in here,” said Thari, a father of eight. “Some camp residents want us to move so they can cook in this place, but there is nowhere for us to move to.”

Two days earlier, the family, who lived in a rural area on the outskirts of Falluja, were hooked up to the power grid, allowing them to use an air cooler and fan provided by UNHCR. “It makes a big difference – things are much better,” Thari said, “but still, daily life is hard.”

The Ismaels are among the many former residents of Falluja who have fled their homes since late May, escaping a government offensive to retake the city from extremist groups.

Camps like Habbaniyah were a hasty response to the massive displacement that ensued. More than 87,000 people fled Falluja and neighbouring areas to escape air strikes by government and coalition forces, and shelling and tight controls by the extremist groups who governed their daily lives for two-and-a-half years.

However, their relief is being sorely tested by the harsh conditions they now face on the ground.

“We are so thankful to be safe with our children… but we are still afraid to go back.”

Thari's wife, Sawsan, 42, told me how the family took three days to escape, crossing the Euphrates River, where they lost jewellery and identity documents and saw other families drown.

“We are so thankful to be safe with our children," she said. "But we are still afraid to go back.”

Sawsan also spoke of her concern at the health of her daughter, who has a kidney ailment. Her other children have developed diarrhoea, caused, she said, by drinking contaminated water. 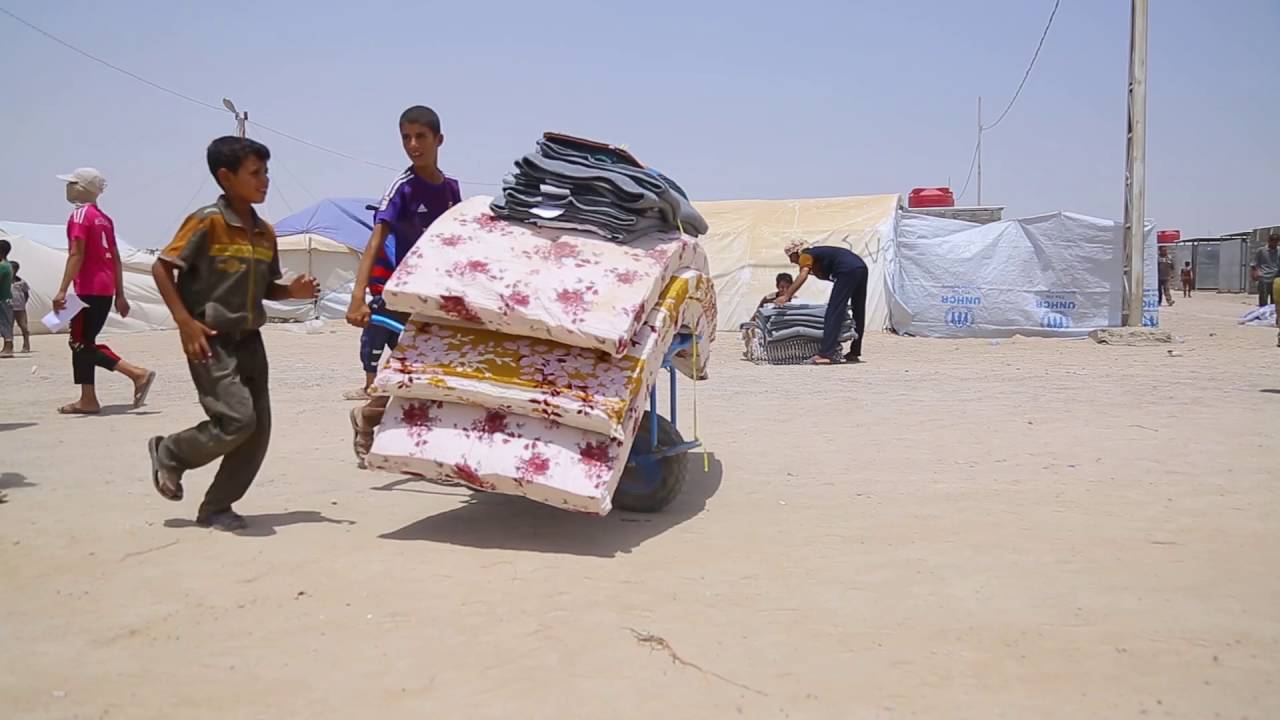 Families struggle in heat and dust of Iraqi desert camp

Walking around the camp, it was clear that conditions were far from ideal, although more assistance was reaching people. UNHCR, with its partner, Muslim Aid, was distributing emergency relief items at one camp I visited two days earlier and planned extra distributions for families at this camp.

Many families were still sharing tents; people soaked towels in water and wrapped them around their heads to try to stay cool, but they say they sleep for only a few hours at night because of the heat. Many had developed skin conditions, possibly because of the heat or as a result of conditions in the camp. Residents complained of insect bites and scorpion stings.

It was especially difficult for female-headed households whose husbands and older sons were absent, having been separated for security screening by the authorities when families reached safety.

“We want to know where the men are,” said Hamdia Hadi, a 45-year-old widow. Her 19-year-old son was taken away for questioning two months earlier.

“It’s a disaster to be here without my son. I have three girls, and one is sick at the moment. I rely on him. I cannot return home to Falluja until he joins us.”

“Falluja is a place of bad memories. I don’t think I can ever return there.”

Munira Mohammed, a divorced mother of four, shares a tent with her sister and her sister’s six children.

“My children are all afraid of the insects, the creatures we find in the camp,” she said. “Even though it’s not easy, we prefer to stay here. Back in Falluja, our house was demolished by an air strike, and for five months before we left we moved around the city, staying in empty houses.

“Now we are all alone. Falluja is a place of bad memories. I don’t think I can ever return there.”

The authorities have already begun clearing Falluja of booby traps and mines, hoping that displaced families will soon be able to start to return. More than 3.3 million Iraqis have been displaced by the conflict, and the humanitarian situation is likely to worsen in the months ahead.

Pledges of extra humanitarian funding at a donors’ conference in Washington in July were a welcome step, allowing agencies such as UNHCR to fund contingency plans, set up camps and pre-position tents and emergency supplies before the next emergency.