Vlada and Alexandr, among 66,000 people with disabilities forced to flee the fighting in eastern Ukraine, are determined to make the most of their new lives.

Vlada (right) and her family fled their home in Luhansk when fighting broke out. She is seen here with her new friend Sasha.
© UNHCR/John Wendle

Teenager Vlada and fellow displaced Ukrainian Alexandr have known hard times. They are among 66,000 people with disabilities who fled the fighting in the east of the country in 2014, along with two million others.

Vlada, 15, has spina bifida, a condition acquired from birth which leaves a gap in her spine. Alexandr, who is in his 60s, lost a leg to disease 10 years ago. Vlada and Alexandr both use a wheelchair.

The resourceful pair have found their own ways to cope in difficult circumstances.

Vlada has taught herself English and how to play the piano, and Alexandr dances in his wheelchair after indulging in his favourite pastime – knitting.

They live in the same corridor of a former Soviet-era sanatorium in the town of Sviatohirsk, near the demarcation line that separates the Donbas territory from areas controlled by the Kyiv government. Vlada's local school is several kilometres from the former sanatorium where she has found shelter and is not accessible for students with disabilities.  © UNHCR/John Wendle

The pair fled the fighting in the east with their families.

“I learned English because I want to see the world,” says Vlada. “It was very difficult but this was my dream.”

Alexandr says he feels like dancing whenever he hears music that he likes. “The mood takes me and I start a move,” he says. “It’s in my blood, the music sets me off.”

Vlada pursues her dream with the help of her 15-year-old friend Sasha, a fellow resident. They first met when their displaced families were housed in another sanatorium in Odesa. 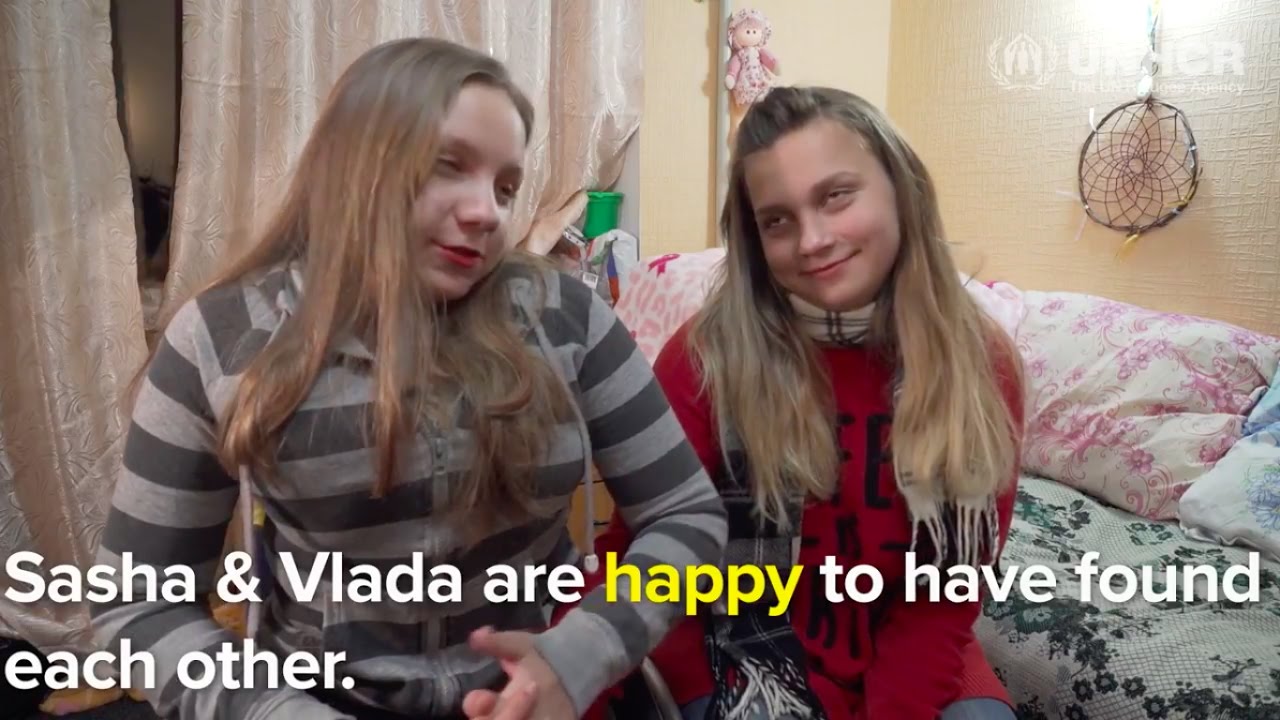 Vlada and Sasha were forced to flee the fighting in eastern Ukraine along with two million others.

Now they are inseparable. Sasha helps Vlada to dress and pushes her on their long walks around the sanatorium. In return, Vlada plays the piano for Sasha and tries to teach her how to make origami birds out of paper.

“With her I’m happy,” Sasha says. “I don’t feel with her as if I’m with a disabled person. I feel that I’m dealing with a complete person.”

Alexandr fills much of his day with knitting. He says it calms his nerves. His grandmother taught him and he started with socks. Now he produces sweaters, scarves, even small woollen carpets which he sells or gives away.

His technique is to use discarded woollen garments that he or others find and then to unpick the knitting. He then uses the yarn to create something new, often using two or three strands in colourful new combinations.

“The mood takes me and I start a move. It’s in my blood, the music sets me off.” Alexandr is among 66,000 people with disabilities who fled the fighting in Ukraine in 2014.  © UNHCR

“My father used to paint pictures,” he says. “They were quite beautiful and I think these things I make are beautiful too.”

For most of the 191 people housed in the sanatorium – both residents with disabilities and their carers – life is often confined to waiting. Vlada and Alexandr are two who have decided to fill their hours with work and new challenges.

However, Vlada is frustrated that she has been unable to attend school. The local school is several kilometres away and, unlike the school she attended in Luhansk before the fighting, is not accessible has no facilities for students with disabilities. Now, teachers go to Vlada's room and she learns alone, while her friend Sasha spends the day in classes with others.

UNHCR is looking into providing materials for ramps that would allow Vlada to attend classes at the school. However, without help from outside, her goals may remain unfulfilled.