During five-day trip, Filippo Grandi pledges support for the displaced and help to build the confidence Rohingya refugees in Bangladesh need to return safely and voluntarily. YANGON, Myanmar – The UN High Commissioner for Refugees, Filippo Grandi, concluded his five-day visit to Myanmar on Friday, committing to continued UNHCR engagement to support displaced people and other affected communities, and help build the confidence that refugees from Myanmar currently in Bangladesh require for their voluntary and safe return.

In Maungdaw township, in the northern part of Rakhine State, Grandi traveled to a number of villages to listen to Rakhine, Rohingya and other communities speak of their challenges, needs and hopes. They also conveyed to him that projects in their villages, such as water reservoirs, school rehabilitation, road improvements, provision of bicycles and skills training are already making a difference in their lives.

These small projects are carried out by UNHCR, the UN Refugee Agency, and UNDP teams, under the tripartite Memorandum of Understanding (MoU) signed with the government of Myanmar in June 2018 and have the potential to help foster positive relations between communities.

While driving in northern Rakhine, Grandi saw stretches of empty land once occupied by Rohingya villages now covered by overgrown vegetation. Few signs remain of the houses and markets that once dotted the landscape. This was a stark reminder of the violence of 2017 that caused over 740,000 Rohingyas to flee the country.

The High Commissioner noted that for the Rohingya refugee population to return, local development is just one factor in building their confidence. He emphasized that the recommendations of the Rakhine Advisory Commission remain essential, citing his recent visit to Cox’s Bazar in Bangladesh, where refugees told him that freedom of movement, access to schools and jobs, and, most critically, pathways to citizenship are the most important issues for their return.

The Rohingya villagers he met with who remain in Rakhine echoed these demands, noting their inability to travel for livelihoods, to access higher education and to gain the rights that citizenship affords. 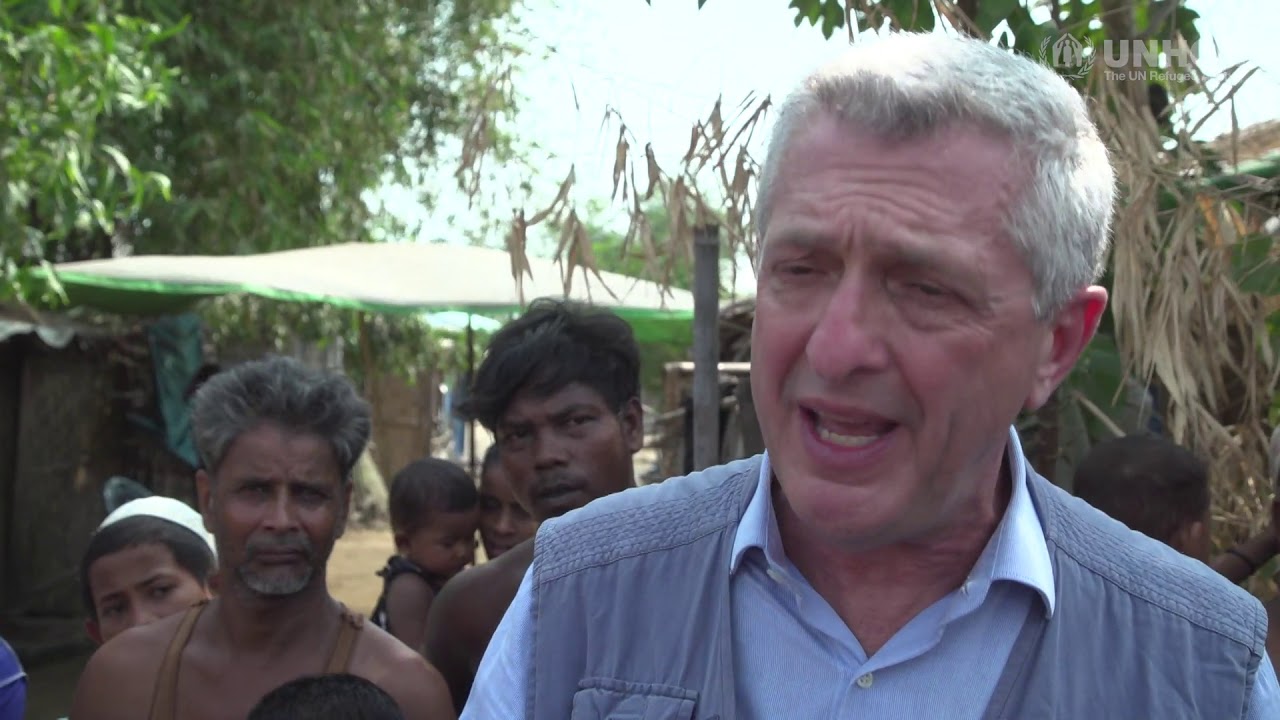 In Buthidaung, at a Buddhist monastery hosting Rakhine people recently displaced as a result of the current insecurity, representatives of the group told Grandi of their wish to return to their homes as soon as possible. They asked for security to be reestablished, unexploded ordinances cleared and strongly appealed for peace. The Rakhine State Government currently estimates that around 29,000 people, mostly from the Rakhine community, are displaced in seven townships in Rakhine state due to this conflict.

Grandi also met with a group of Rakhine villagers in Maungdaw township, once a cluster of five villages surrounded by farms and fish ponds with a large Rohingya population who are now refugees in Bangladesh. They expressed concerns about the impact on the local economy and labor shortages following the departure of their Muslim neighbours.

The High Commissioner also visited Rohingya IDP camps on the outskirts of Sittwe, in the central part of Rakhine State. The camps are segregated from other communities, and restrictions are in place limiting their movement, with severe consequences for their ability to earn a living.

Representatives of the displaced, who have been enduring these conditions for seven years, told Grandi of their wish to return to their places of origin. They expressed their wish to work, farm or fish in order not to continue living in a state of dependency on humanitarian aid. But fundamentally, they told him that they yearn for citizenship documentation and equal treatment. Some 128,000 people are still displaced in central Rakhine since 2012.

From both the long-term and the newly displaced communities, Grandi heard a recurrent desire to return to their original homes as soon as possible.

In constructive and substantive meetings on Thursday with State Counsellor Daw Aung San Suu Kyi and other senior officials, Grandi urged the government to take action to enable the refugees in Bangladesh and those displaced inside the country to return home safely. He noted the positive efforts of the government to develop a national strategy on closure of IDP camps, and stressed the need for sustainable, safe and voluntary solutions to their plight in full consultation with the communities concerned. He also welcomed the initiatives to find solutions to the displacement in Kachin State and elsewhere.

Grandi also conveyed the key concerns that he heard from both the Rakhine and Rohingya communities and from the refugees in Bangladesh.

The High Commissioner indicated his satisfaction that the Tripartite MOU will soon be extended for a further year and appreciated the commitment of the Government to improve conditions. Small, impactful community-level projects can make a big difference in people’s lives.

In his discussions, Grandi also encouraged the Government to accelerate the verification of some 98,000 refugees remaining in Thailand to allow expanded solutions for this group, through repatriation or legal access to the labour market in Thailand. Some 729 refugees have returned from Thailand since October 2016, and action is now needed to accelerate solutions for the remainder.

On Thursday, Grandi also signed a separate Memorandum of Understanding with the Department of Disaster Management of the Ministry of Social Welfare, Relief and Resettlement covering UNHCR’s broader activities throughout the country.

He also renewed the strong engagement and readiness of his organization to support the Government in finding solutions for displaced and stateless people.