Young, abandoned and on the run

To get to school each day, Salvadoran brothers Anderson, 17, and Jairo, 14, had to ride a bus from the territory of one brutal street gang to that of their blood rivals, risking robbery, murder or being corralled into their ranks.

When the gangs stepped up the harassment, shaking down the family’s pizzeria in their hometown in southeast El Salvador, the two boys, their father and elder brother ran for their lives – that’s when things became really complicated.

Their mother walked out on them when they were young children. Then, just as they were navigating the asylum process in Mexico, their father and his new girlfriend suddenly disappeared, cutting off all contact with the brothers.

“If we go back to where we’re from, I think they’d kill us,” says Anderson. “The gangs told us we had to join or we’d be dead.”

With no parents to look after them and no possibility of returning home, the siblings’ 20-year-old brother Moises stepped in to head up the family. Acting as legal – and practical – guardian for his younger siblings, he is doing all he can to help them start over in Mexico.

Boys like the Sánchez brothers captured attention around the world in 2014 when tens of thousands of unaccompanied Central American children fleeing raging gang violence at home turned up at the United States southern border.

“If we go back to where we’re from, I think they’d kill us. The gangs told us we had to join or we’d be dead.”

But even though the headlines have dropped off by 2016, thousands of youngsters keep making their way north out of El Salvador, Honduras and Guatemala, which are convulsed by increasing levels of violence.

“The flow of unaccompanied children is still very high,” says Cynthia Pérez, director of attention and institutional coordination for the Mexican Commission for Refugee Assistance, or COMAR in Spanish. “Different agencies are being trained to make sure we identify any children who have suffered violence to offer them the chance to request asylum,” she adds.

The so-called Northern Triangle countries of Central America are among the most dangerous in the world as the Mara Salvatrucha and its rival, Barrio 18, battle to grow their criminal empires, turning the streets into war zones and young boys into mercenaries.

The gangs run criminal rackets ranging from robbery, extortion and kidnapping to transporting and selling drugs. Young people snared in the mayhem face harassment, assault and forced recruitment into their ranks.

“Leaving is the only option if you don’t want to join the gangs,” says Anderson. Promises from the gang of good pay and protection quickly become threats. And the Sánchez brothers had the bad luck of living in a neighborhood controlled by one gang, while going to school in another. Their journey to school meant they would be betraying one, or both gangs.

“I enrolled in senior high school but never went,” says Anderson. “I didn’t want to cross from one zone to the other. It was too dangerous.”

Keeping your head down and avoiding the gangs does not guarantee safety either.

“We used to go out to a football pitch to play,” says Anderson. “But one time the gangsters watched us and followed us home, so we couldn’t go out and play football anymore.”

But they can breathe easier at their new, temporary home in a quiet neighbourhood on the outskirts of Tapachula. The southern city near the border with Guatemala is a hub for refugees coming from Central America. This is where they learned about their right to request asylum in Mexico with COMAR. 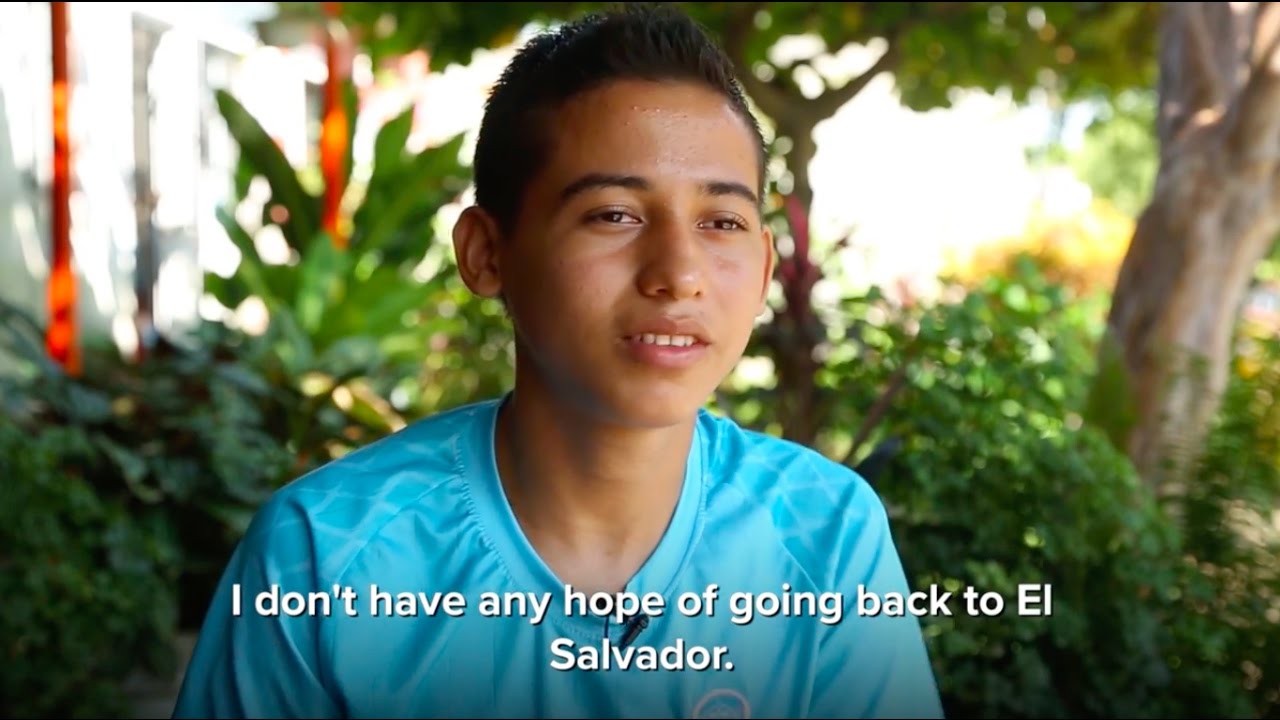 Thousands of youngsters are fleeing increasing levels of violence in El Salvador, Honduras and Guatemala.

Asylum applications in Mexico increased 152 per cent in the first half of 2016 compared to the previous year. UNHCR, the UN Refugee Agency, expects Mexico to receive more than 8,000 applications this year, 95 per cent coming from El Salvador, Guatemala and Honduras.

The Sanchez brothers’ asylum application became even more complicated when their dad left them.

“COMAR told me that without their legal guardian, Anderson and Jairo would go into child services,” says Moises. “But I couldn’t let my brothers be separated from me.”

While Mexico has improved conditions and is providing alternatives for refugees, many minors seeking asylum still end up in detention centres. UNHCR is calling for the practice to stop entirely. While this issue is worked out, Moises struggles to stay with his brothers. He was able to claim legal guardianship of his brothers and keep them together.

In August, the three Sanchez brothers were given asylum in Mexico. It was a moment of joy and relief, but for three young refugees on their own, there is still a long road ahead.

"Unaccompanied minors not only need access to asylum in Mexico, but ... access to education, health and psychological services."

"Unaccompanied minors not only need access to asylum in Mexico, but we also need to ensure they are receiving access to education, health and psychological services," says Mark Manly, UNHCR representative in Mexico.

They are among over 2,500 asylum-seekers in Mexico who received financial and other support from UNHCR in the first half of the year, but Moises still works most days, earning 700 pesos – equivalent to US$37 – per week. He is hoping to save up so the brothers can start a new life with cousins in northern Mexico.

“I want them to be able to study and be in a safe, secure home. It’s been too long since they’ve had that,” says Moises.

Neither Anderson or Jairo have been able to go to school in more than a year. They spend the days wandering the quiet streets, enjoying the chance to just be outside again.

When they have 15 pesos – US$0.80 –  to spare, their luxury is a half hour of Xbox football at a video game cafe. They spend the rest of their time on their smartphones on a street corner where they found an open WiFi signal. They laugh at pictures and silly videos.

“The internet comes from the public school. But we don’t have residence cards so we can’t go back to school yet,” says Anderson, pointing at the chain-linked schoolyard across the street.

The brothers may have found a bit of peace in Mexico, but they still have a long way to go.