UNHCR Special Envoy Angelina Jolie meets members of the Yazidi minority in Khanke IDP Camp, Iraq, on 25 January, 2015. Ms Jolie was visiting Syrian refugees and displaced Iraqi citizens in the Kurdistan Region of Iraq to offer support to 3.3 million displaced people in the country and highlight their dire needs.   © UNHCR/A.McConnell

Since Ms Jolie's last visit to Iraq in September 2012, the scale and gravity of the humanitarian situation have increased dramatically, as the conflicts in Syria and Iraq intensify and become intertwined.

"It is shocking to see how the humanitarian situation in Iraq has deteriorated since my last visit. On top of large numbers of Syrian refugees, two million Iraqis were displaced by violence in 2014 alone. Many of these innocent people have been uprooted multiple times as they seek safety amidst shifting frontlines."

While a massive aid response has been launched by UNHCR and partners, an estimated 330,000 people across the country still live in sub-standard shelters as they face their first winter away from home.

On Sunday, Ms Jolie visited internally displaced Iraqis living in an informal settlement and a formal camp at Khanke, a 40 minute drive from Dohuk city. Together, the sites now accommodate more than 20,000 people from the Yazidi minority who fled Sinjar and surrounding areas in early August. Jolie spoke to people with dramatic stories of escape, including people who managed to flee their imprisonment by walking through the night and hiding by day. She also met elderly women who were among the 196 Yazidis recently released by insurgents and now staying in the informal settlement at Khanke.

The women recounted their ordeal of kidnap, detention, escape, and release. Jolie listened to the stories of extreme hardship and loss, including from people who still have sons, husbands and daughters detained, and others who had heard their daughters were moved to Syria. Others had lost all contact with their loved ones and had no idea of their fate.

"Nothing can prepare you for the horrific stories of these survivors of kidnap, abuse and exploitation and to see how they cannot all get the urgent help they need and deserve," Jolie said. "The needs so dramatically outstrip the resources available in this vast crisis. Much more international assistance is needed," the Special Envoy added.

Funding shortfalls have affected the scale and type of programmes to help survivors of violence and human rights abuses alongside the provision of shelter and other assistance. While much aid has been provided by the government, UNHCR and partners over the last six months -- including 34 new camps built or under construction -- aid operations are hampered by lack of funding alongside security constraints. UNHCR, for example, has received only 53 per cent of its required USD 337 million for its response to internal displacement in Iraq during 2014 and has received the go-ahead to proceed on projected funding for only 31per cent of its required USD 556 for 2015.

The Kurdistan Region of Iraq (KRI) is hosting some 900,000 displaced people, placing an enormous strain on hosting communities, authorities and infrastructure. The huge influx of people from Mosul and Sinjar between June and August 2014 caused a three-month delay in the start of the school year, as over 700 public schools in Dohuk were occupied by uprooted people. An estimated 20 per cent of the five million people in the KRI are either displaced Iraqis from elsewhere or refugees.

"I am very thankful to the Kurdish authorities for hosting so many displaced Iraqis alongside Syrian refugees at a time when they are facing so many challenges," the Special Envoy said.

On Sunday morning, Ms Jolie made a return visit to the sprawling Domiz camp which now hosts more than 50,000 Syrian refugees - more than a 5th of the entire population of Syrian refugees in Iraq, which currently stands at 233,000. She last visited Domiz, now the largest Syrian refugee camp in Iraq, on 16 September 2012 when it hosted some 8,500 people.

As the conflict in Syria approaches its fifth year, Ms Jolie said: "The war in Syria is at the root of so many of the problems faced here in Iraq and across the region. There is an urgent need for international leadership to break the cycle of violence in Syria, and to find a way forward towards a just and sustainable peace agreement."

Ms Jolie is on her fifth visit to Iraq and her sixth visit to Syrian refugees in the region.

"Too many innocent people are paying the price of the conflict in Syria and spread of extremism," Ms Jolie said wrapping up the first day of her two-day visit to Iraq. "I express my deepest sympathy to the family of Haruna Yukawa the Japanese hostage reportedly murdered in Syria on Saturday, and to all the families and victims of these vile and extreme acts."

More than 3.8 million Syrians have fled to the neighbouring states of Turkey, Lebanon, Jordan, Iraq and Egypt. Another 7.6 million Syrians are displaced inside the country. 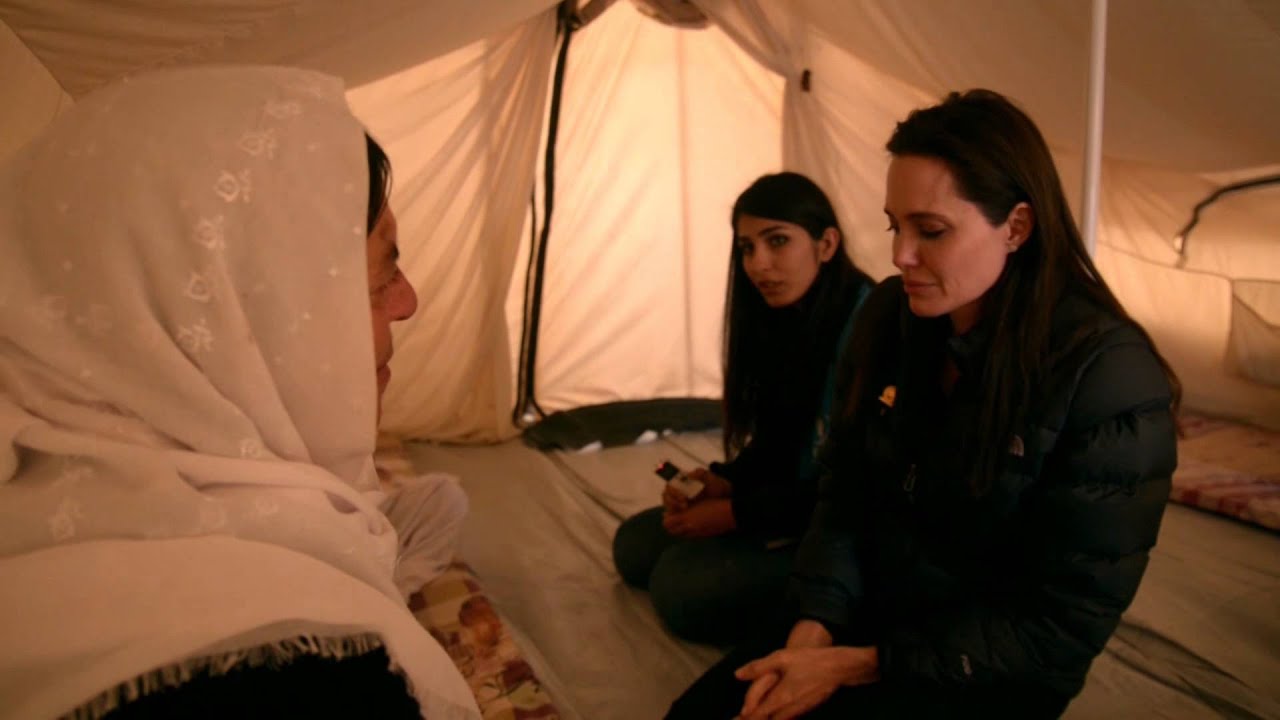