He was born without legs, but Syrian refugee Belind teaches weightlifting and breakdancing to youngsters at a refugee camp in Iraq. They make their moves under the watchful eye of their teacher, Abdullah Mohammed Amin Tamo. Better known as “Belind,” the 20-year-old began holding dance classes inside the Syrian refugee camp after he and his family escaped the fighting in their hometown of Qamishli, in September 2013.

It is remarkable as Belind, which means “high place” in Arabic, was born with no legs. Determined that his disability should be no obstacle, he started the classes to give youngsters something to do, and to act as an inspiration to others around him.

“I am not a person who likes to sit around. I see myself having talents that no ordinary person has,” says Belind, with a winning smile. “There is a saying that ‘God takes something from you and gives you back something else.’ He took my legs, but he gave me brains.” 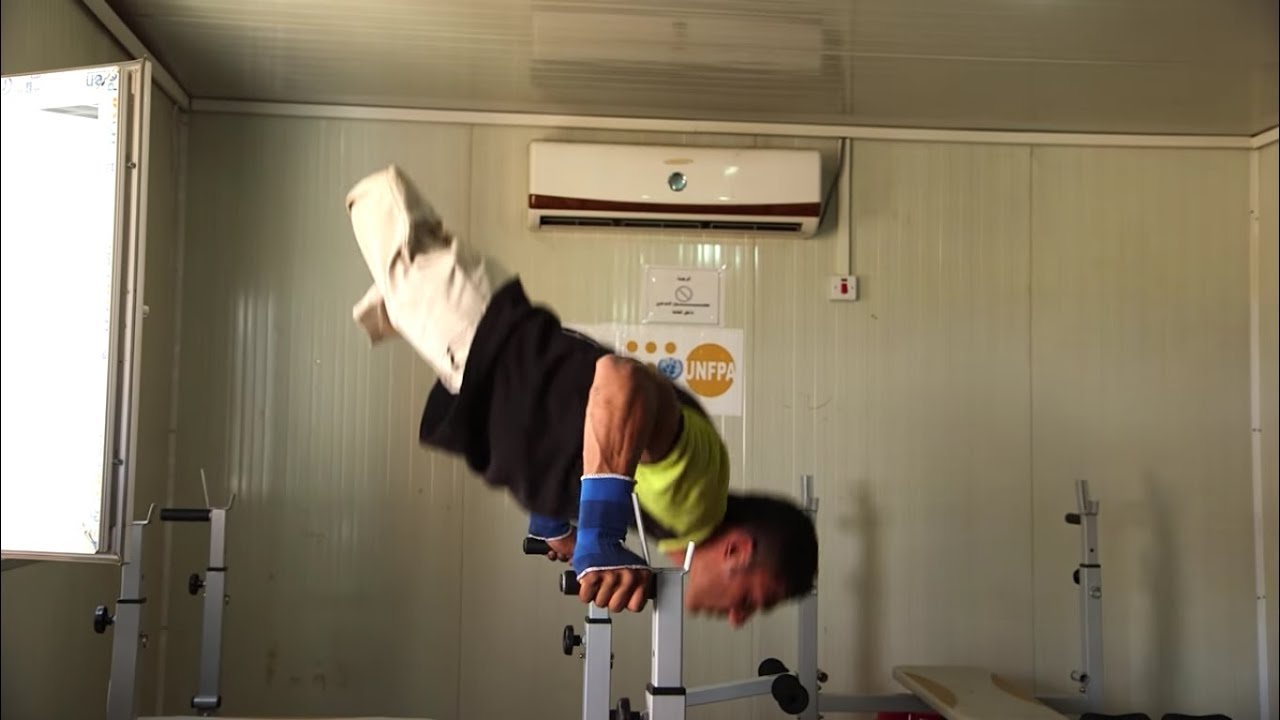 Before he left Syria, Belind was thriving as a student, getting good grades and dreaming of becoming a doctor. Now he has been forced to leave school, because he is not mobile enough to get to class in the camp on a regular basis. He relies on family members to push his wheelchair, and he says in order to get back to school, he needs a powered wheelchair that his family cannot afford.

Despite the setback, Belind is determined to prove that he is able to live a normal life. In Syria, he was a champion weightlifter. Today he holds daily weightlifting sessions for other young men in the camp. For fun, he spends his downtime playing ping-pong and football with his brothers and a large collection of friends.

“I don’t want people to say that a person missing a hand or leg cannot play sports,” Belind says. “I play sports more than ordinary people do. My relatives say they can’t keep up with me!”

After more than two years in the camp, Belind is holding on to his dream, to be relocated to the United States, where he hopes to receive rehabilitation and prosthetic limbs allowing him to walk. He also hopes to one day be able to go back to school and finish his education.

Belind makes a point of meeting with other refugees in the camp housing 7,500 people, encouraging them to stay strong. “This is a hard situation. We want to get out of here because we cannot live like this. This is what life has brought us, and we need to find a way to deal with it. We should not spend time complaining – we need to find solutions. As young people, we are the strength of the camp.”

His young breakdancing students could not agree more. “Belind is like a brother to me,” says 15-year-old Yousif Abbas. “I have learned many things from him, like how to be a good friend and to respect other people. Belind has a great attitude and I am learning that from him, too.”