Yangani Primary School in the Bidibidi refugee settlement in northern Uganda has 5,000 students and a staff of just 38.

At first light, teacher Patrick Abale leaves his tent, pitched among others on the edge of Yangani Primary School in the Bidibidi settlement in northern Uganda.

He strides towards the administration block, drops off his books in the office he shares with the school principal and turns to look at the first few pupils arriving.

“When I joined here there were more than 6,000 pupils in this school,” he says, as the sound of stamping and shuffling feet gradually fills the chill morning air.

The trickle of arrivals turns into a torrent. By now students are pouring in from all directions. 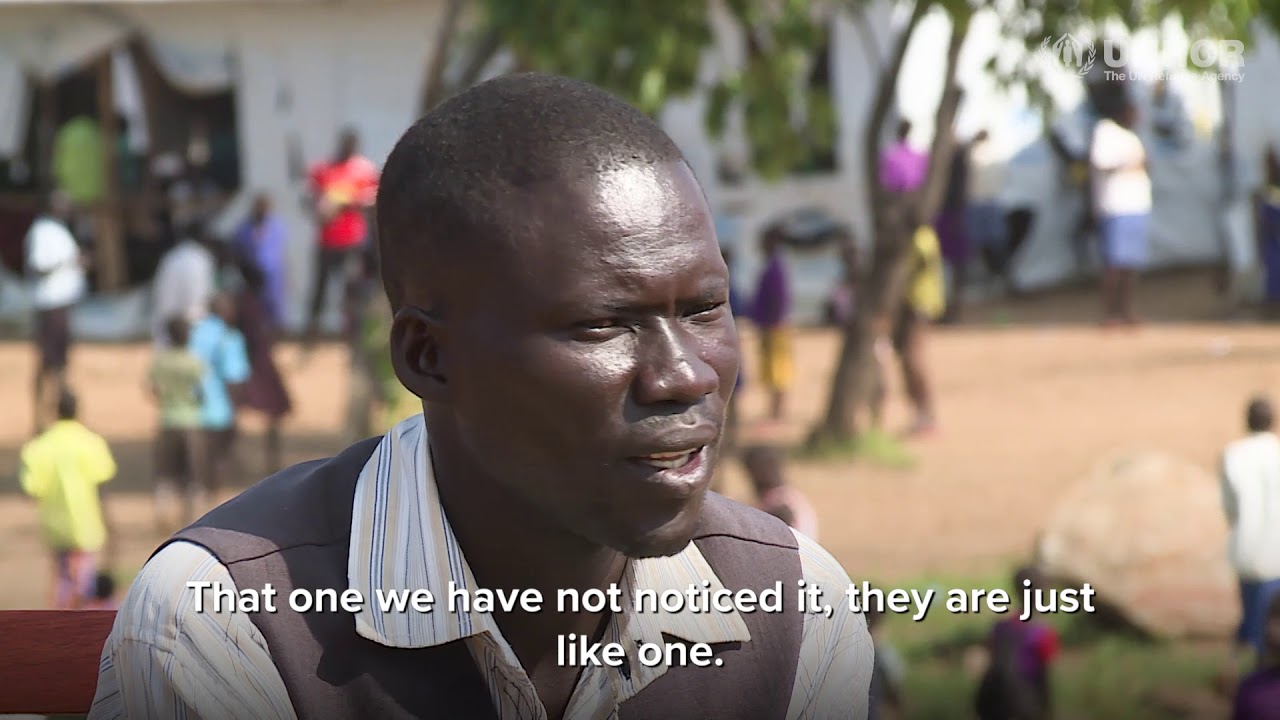 When it first opened several months ago, there was a rush to enrol, and the school was forced to turn some children away because of the lack of space, reducing the number to about 5,000 today, which, Patrick notes, is “a very big number”.

Patrick, a Ugandan, is a deputy principal in charge of academic studies and administration at Yangani. It is a Ugandan state school and, although the children are mostly refugees, there are some local pupils here, too.

Despite the pupil numbers, the school has a staff of only 38. In 10 years of teaching, Patrick has worked in some difficult environments but Yangani is on a different scale.

Spread over roughly two acres, the school is a patchwork of tattered plastic tents, many with holes, flapping in the wind. A sloping valley separates the administration area and upper primary classes on one side from the lower primary classes on the other. Inside the classrooms the temperature soon rises and children squirm in discomfort.

“There just isn’t enough space for all the students.”

“Things are really tough here because there just isn’t enough space for all the students,” Patrick says, gesturing into one of the classrooms.

A glance inside reveals a crowded scene: children occupy every available space, with as many as five sharing a desk. Some sit on the floor, others stand at the back and in the aisles, clutching their books to their chests.

“Sometimes, because of the congestion, they stand next to the teacher at the front of the class,” Patrick says.

Yangani school opened in February this year to cater to the rapidly growing numbers of South Sudanese refugees. Uganda has been among the most generous countries in its response to the influx, welcoming refugees, giving them plots of land and making public services, including education, available.

Now host to nearly 2 million people who have fled South Sudan, 60 per cent of them children, Uganda is struggling to keep up.

According to the education ministry, the standard teacher-to-student ratio should be one to 45. There should be three children to a desk, and 14 to every lavatory.

Yangani breaches these rules by a wide margin. As an administrator, Patrick tries to ensure that learning materials are shared equally across the classes. “We now have 279 textbooks for all students, so you can imagine how tough it is to share,” he says. That is one textbook to every 18 children.

UNHCR, the Ugandan education ministry and partner organizations are looking for ways to increase capacity, setting up more schools and working with national and local officials to identify existing ones that can expand.

In this way, they hope to bring more refugee children into the national education system and raise standards for refugees and local communities. Uganda cannot do this on its own. “The government is already doing its level best, so we are calling for more donor support to fill the gaps,” says Julius Okello, a UNHCR field officer in Bidibidi.

I am introduced to 17-year-old Bashir, who fled his home in South Sudan last November. Now he lives in Bidibidi as an unaccompanied minor. His parents stayed behind but he has no idea what has happened to them.

There were no other schools nearby so he had to wait for months before Yangani opened and he could enrol. Bashir is in his last year of primary school and he says he is doing his best to study diligently, but admits it can be hard.

“We don’t have enough books,” he says. “If you get a little money, you can buy some, but most students can’t afford them. Some of us who don’t have parents here struggle.”

The brimful classrooms are evidence that there is plenty of demand for education. Most refugees are settled in areas a long way from existing state-run schools. Setting up new ones not only gets refugee children into the national education system, but also raises capacity and standards for local communities. “Schools like Yangani are filling a crucial gap,” Okello says.

However, it is difficult for children to learn under such constrained circumstances. “There are no boundaries to separate the classes. Two different classes take place next to each other, so whatever is being taught in one class is heard in the next one.”

Patrick surveys the ranks of children before heading off to teach another class. “Imagine only 38 teachers for all these students,” he says. “You can get overwhelmed.”