COX'S BAZAR, Bangladesh – The world must not turn away.

It was both a plea and a warning issued by three senior UN officials visiting the Kutupalong refugee camp today, the largest in the world.

The settlement is home to more than 630,000 Rohingya refugees who fled the violence in Myanmar directed against them in 2017. An estimated 190,000 live in settlements in the vicinity, along with 330,000 of the most affected host communities. The monsoon season approaches.

The three UN leaders emphasized that solidarity with the refugees, and the local people hosting them, continues.

“I’m really appealing to donors, in light of the hardship of the people here, in light of the potential risks posed by cyclones and monsoons,” said Filippo Grandi, the UN High Commissioner for Refugees. “We need those resources – not in three months, not in four months, but now.”

He was with Mark Lowcock, the UN Under-Secretary General for Humanitarian Affairs and Emergency Relief Coordinator, and António Vitorino, Director General of the International Organization for Migration (IOM) on a three-day visit to Bangladesh. 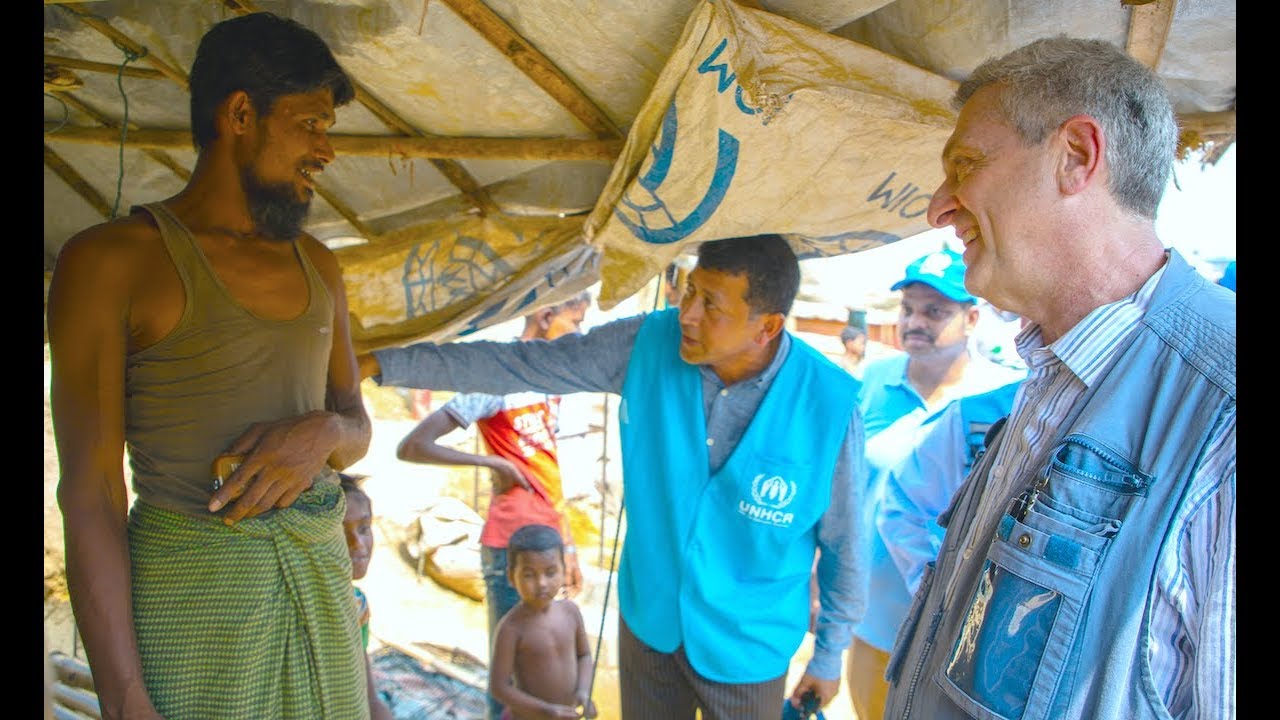 In Dhaka on the first day they met with Prime Minister Sheikh Hasina, thanking her for the government’s enormous and generous efforts on behalf of the Rohingya over several decades, and especially since the start of the 2017 crisis.

The three UN leaders then made a point of visiting the camps together. The UN, they said, had responded to the Rohingya crisis in a unified manner. They wanted to emphasize that that unity and solidarity with the refugees, and the local people hosting them, continues. UNHCR, IOM and partners work in support of the government to manage the 34-camp complex. The problems the refugees face remain immense. The leaders noted that more than half of the 540,000 refugee children under the age of 18 have no access to education, and the rest have access only to very limited schooling. Only a handful of teenagers are going to school.

The three leaders met men serving as role models to the community, as well as female outreach volunteers. Both groups focus on raising awareness and supporting prevention of sexual and gender-based violence. Both told the delegation that in the absence of opportunities to work, learn and build skills, idleness among refugees is dispiriting – and over time, deeply damaging. Mohammed Faisel, 23, poses for a portrait at Kutupalong refugee camp in Bangladesh. A Rohingya refugee from Myanmar, he says he uses every opportunity to talk with men in his community about the need to combat sexual and gender-based violence.  © UNHCR/Will Swanson

“So many of us are uneducated,” Mohammed Faisal, 23, a male role model said, referring to many male refugees he knows. “They say, we are useless.” And for some men, their frustration leads them to feel distressed.

“One of the things UN and other agencies can do,” Mark Lowcock said later, “is to make sure that all those issues that women and girls are vulnerable to are thought about here with care and understanding while people are still stuck in the camps.”

The looming monsoon season and the need for money to prepare was a major concern, but the environmental effects of the refugees’ arrival were also discussed. The building of the camps led to massive deforestation. A major reforestation project has begun.

The UN leaders pointed out that the Joint Response Plan for 2019 has set aside a large percentage to help the local Bangladeshi population with environmental and agricultural improvements. They also called for more development support for the people in impacted communities in the Cox’s Bazar District.

The leaders watched as hundreds of Rohingya lined up for the joint government and UNHCR biometric registration. More than 200,000 refugees have already registered for an identity card. Almost all see it as a way to open a door to eventual return to Myanmar.

“This document gives me the sense that something good will come of it in the future,” Nisa Alin said. She fled in terror with her four daughters in August 2017. “This will help us to go back, I hope, but with our rights restored.”

“Having an identity is a basic human right,” Grandi said after talking to refugees going through the registration process. “All their life, many have been without proper identification, so having this is an incredible step into a more dignified and safe life.”

"This document gives me the sense that something good will come of it in the future."

“The Rohingya refugees are fully aware that if they return to Myanmar they need to guarantee that such a return is joined to a recognition of their fundamental rights as human beings,” Antonio Vitorino said. “It is absolutely necessary to find a solution that guarantees the interests of the refugees to return to Myanmar to rebuild their lives.”

But pursuing a solution for the Rohingya refugees will be challenging and patience is needed. Grandi later told reporters that efforts to engage with the Myanmar government have been slow. An agreement to allow UNHCR to visit some 1,000 Rohingya villages has led to visits to just 100, although a limited number of quick impact projects have now started.

Grandi said he was hoping to visit Myanmar again in May to assess the situation in Rakhine, where the Rohingya fled from. He underlined that the key moves and progress must be made by Myanmar.

“The Myanmar side must address the issue of Rohingya rights,” he said. “That includes freedom of movement, access to jobs and services, and a path to citizenship.”